For Cortina Applications (as this build is based on one):

As previously mentioned, there are two choices for the gearbox. The easiest (as it's a nut and bolt job) is the Type 9 5 speed as found in late 2.8i Capri's, Sierra XR4i and manual 2.8 Granadas. The other is a MT75 Hybrid.

Type 9
For Cortina applications this gearbox allows you to retain the original prop-shaft as it is no longer then the old 4 speed gearbox. All that's required to mount it is the gearbox cross member from an automatic Cortina that simply needs to be swiveled through 180 degrees and all the bolt holes line up! (assuming you can find one, if not you'll have to make your own mount up) You'll also need a speedo cable from a 5 speed Sierra as the original 4 speed Cortina item will be too short.
However, this gearbox really is pushed to the limit with this engine and many people have destroyed their gearboxes after giving it a bit too much abuse at the traffic lights. Apparently the weak spot is the large aperture in the top of the box that the sheet metal cover sits over. Under high torque loads this weakness allows the casing to distort which results in gear climbing over each other the gearbox imploding! Stronger more rigid cast cover plates are available but I cannot vouch for there effectiveness.

MT75 Hybrid
The MT75 from later Sierras and Granadas is a much stronger gearbox but it has it's own drawbacks and fitting it is a lot more complicated. First of all the gear ratios are apparently not as good as the type 9 and I have been informed by some Sierra owners that it is necessary to change up to third gear to reach the magic 60mph. It is also recommended to change the fifth gear set for that of the diesel version to give better motorway cruising. However, as you will have to open the gearbox up anyway this isn't such an inconvenience.
There are two real stumbling blocks with this gearbox. The first problem is that you need to use a prop-shaft with a sliding joint with this gearbox which for the Cortina means having a custom prop made. The type 9 gearbox has a sliding portion at the output flange but on the MT75 the flange position is fixed.
The second problem is even more involved, the bell-housing on these gearboxes is cast into the main gearbox casing. The reason that this is a problem is that in manual form, the V6 version was only ever used with a 4 wheel drive gearbox. The big V6 powered Granadas all had automatic transmissions. This means that all the normal rear wheel drive gearboxes have the 4 cylinder engine bell housing cast into them which won't fit the V6 engine. To overcome this problem your only option is to build a hybrid gearbox by swapping the internals and rear end from the 2 wheel drive gearbox into the main casing of the V6 gearbox.
For Cortinas you will also have to fabricate your own gearbox mounts. I don't know if the transmission tunnel on the Cortina needs re-shaping at all but it's reasonably large so hopefully shouldn't.

The choice of flywheel and clutch will come down to the choice of gearbox. If you are using the Type 9 gearbox then you will need to use the flywheel and clucth from a 2.8ltr Cologne. Don't forget to make sure you get the correct V6 spec clutch release arm and ruber boot for the end of the clutch cable as they are different to the four cylinder versions.
If you are using the MT75 then you'll need the flywheel and clutch from a 2.9i Cologne. The reason for this is the 2.9i Cologne flywheel is a bit thicker than the 2.8ltr version.
You will also need the needle roller bearing that fits into the back of the crankshaft and supports the end of the primary/input shaft of the gearbox. 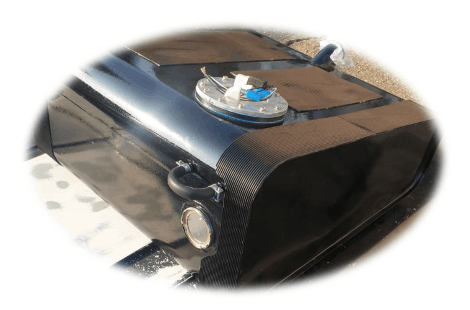 Being a modern(ish) Electronic Fuel Injected engine it require a stable high pressure fuel supply. When I carried out this conversion to my Cortina I used an external pump and accumulator system as found on many Bosch K-Jetronic equipped cars. But this wasn't very satisfactory and an in-tank electric fuel pump is the best way to go. Click on the picture to be taken to the in-tank fuel pump page.
You will still need a fuel filter to go with it and you will need to make up a simple loom to power the pump via a relay, the relay being controlled by the ECU as detailed in the wiring section.

The contents of this website are purely a reflection of my own experiences and knowledge gained whilst working on my various projects. Anything you do based on what you have read here is done so entirely at your own risk.
Personally I wouldn't trust some like me with a lawn mower! You have been warned! Flapper-bat!

Made with Mobirise free builder