The mk3 & 4 Escort came with four different types of engine fitted, three petrol and one diesel.
The three petrol engines fitted are:
OHV (in 1.1 and 1.3 ltr sizes)
HCS (replacing the OHV in 1989)
CVH (in 1.3, 1.4 & 1.6 ltr sizes with both carb, mechanical and electronic fuel injection and turbocharged)
I'm afraid I have no details for the diesel version. Sorry.

When it comes to engine swaps the first limitation is your own abilities. Swapping to an engine from higher up the range such as an RS turbo swap is going to be a lot easier than fitting an engine that never saw service in these Escorts. Fitting an engine from a different manufacturer carries with it even more obstacles to overcome but it is not unachievable. I know of one Escort that was successfully converted to Rover K-Series power!
The easiest and most cost effective engine swap for something that was never fitted to the Escort is probably the Ford Zetec from the later Escorts and the Mondeos. 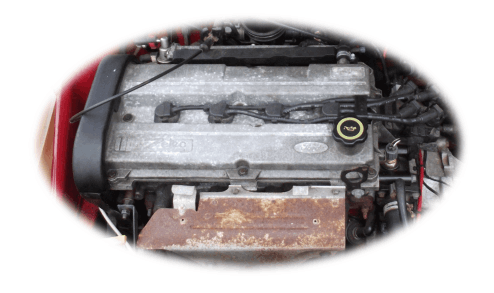 This is covered in its own section on the main site. The guide is based on the conversion I carried out on my own Mk3 Escort Cabriolet so everything you need to know should be covered in there.Click the picture to be taken to it.

The contents of this website are purely a reflection of my own experiences and knowledge gained whilst working on my various projects. Anything you do based on what you have read here is done so entirely at your own risk.
Personally I wouldn't trust some like me with a lawn mower! You have been warned! Flapper-bat!

Create your own site with Mobirise